Showing posts from August, 2010
Show all

The Faithfulness of God

August 23, 2010
This phrase -- the faithfulness of God -- has been in my heart and head.  We celebrated the 40th anniversary of final profession for three sisters yesterday afternoon, and this idea was part of the prayer and reflections.   My life has been filled lately with leavetaking.  I'm preparing to move in a week, leaving behind a city that has been my home for most of the last 10 years, and a group of women, my religious sisters, whom I love deeply.  My heart has been heavy, even though I know that what awaits me on the other end is good and beautiful -- another group of amazing women who are my sisters, and entrance into the novitiate. The prayer reminded me yesterday that no matter how heavy this leavetaking feels, I am supported by and grounded in God's faithfulness.  God will not abandon me, and remembering that brings me peace.  My fears, doubts, sadness are so small when compared to the profound faithfulness of God.  When I look over the last year, and even over the course of m
1 comment
Read more 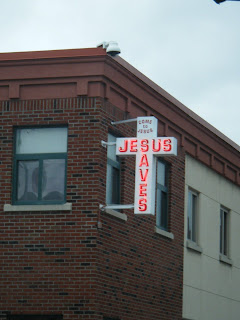 Taken in June, Albany, NY While the Transfiguration was a few days ago now, it's still in my thoughts...  I think my favorite reading is the second one of the day, 2 Peter 1:16-19: Beloved: We did not follow cleverly devised myths when we made known to you the power and coming of our Lord Jesus Christ, but we had been eyewitnesses of his majesty. For he received honor and glory from God the Father when that unique declaration came to him from the majestic glory, “This is my Son, my beloved, with whom I am well pleased.” We ourselves heard this voice come from heaven while we were with him on the holy mountain. Moreover, we possess the prophetic message that is altogether reliable. You will do well to be attentive to it, as to a lamp shining in a dark place, until day dawns and the morning star rises in your hearts.  That second part is my favorite:  the reliability of the message and the apostles' attentiveness to it. "You will do well to b
2 comments
Read more

August 01, 2010
A little story. About five years ago, I interviewed for a job.  It was a good job, one that fit my skills, and I was well qualified (or they wouldn't have interviewed me, honestly).  Another woman was also interviewed, and she was offered and took the position.  I received a very kind rejection letter, explaining all the reasons why I was not chosen.  It was actually a good letter--the reasons given were very real, and spoke only of my lack of fit for the position.  In other words, I really felt that the decision was fair, and that the other candidate was clearly a better choice.  The letter also let me know that I, too, would have done well in the position.  It was really a positive affirmation. Yesterday, I was talking with one of my former professors, who had been speaking with people from that same institution that interviewed me.  He discovered that the woman who was hired has been let go, not because of anything she did wrong, but because they are changing their prioritie
Post a Comment
Read more
More posts