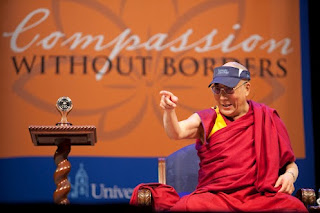 I had the great honor to hear His Holiness the Dalai Lama speak at the University of San Diego yesterday.  He is charming and funny--and so wise.  At the core of his message, he says that each of us should get to know our own mind, and choose to feel compassion and respect for others, instead of anger, hatred, and fear.  By choosing these positive things, our actions bring about happiness in ourselves, and peace in our world.

He said that anger and hatred are things that we can choose not to feel, because they come from within, while things that harm us from the outside are not things we can choose.  That seems like a good reminder.  Yet, he also said that it doesn't mean he doesn't get angry--that we are all human.  But we can cultivate a peaceful mind, and that will make us happier than any material possession would.

He was asked about the most difficult situations in our present world, and he named several (Syria above all).  He says he has seen some big changes in his lifetime, and he believes the world is becoming more civilized.  "It is far better to remain optimistic" because if you remain optimistic, then you might find the ways and means to work on the problem.

He defined compassion as "genuine concern for another's well-being," which leaves no room for injustice.  How do we find compassion?  By recognizing that each one of us, even the one who seems very different, is human and deserves respect.

So, my challenge for now:  to live and act out of love for others, even when I am fearful or feel angry or hurt.  That is much harder than it sounds.

And for my nunny friends... how can we live that in this moment of deep hurt and challenge?
compassion Dalai Lama justice peace respect