A detour from Holy Week...

March 26, 2013
An interesting (and very Catholic) thing happened last week:  the relics of St. Mary Magdalene visited this city, and I was invited to preach for a Vespers service in their presence.  So, I offer here the reading from that service and my preaching for the occasion.

Maybe it's not such a detour from Holy Week after all:  Mary Magdalene is certainly present in the events of this week, and her friendship with Jesus is highlighted both at the foot of the cross and at the empty tomb. 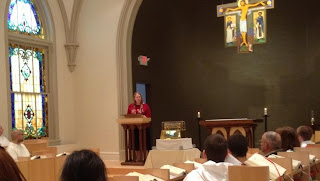 That's me, with MM's tibia in the gold and glass box.

What then shall we say to this? If God is for us, who can be against us?  What will separate us from the love of Christ?  For I am convinced that neither death, nor life, nor angels, nor principalities, nor present things, nor future things, nor powers, nor height, nor depth, nor any other creature will be able to separate us from the love of God in Christ Jesus our Lord.

Friendship is both powerful and tender.

Friendship in Christ has brought about profound Christian movements.  From the friendship of Clare with Francis came the Franciscan women's orders.  From the friendship of Jeanne de Chantal and Francis de Sales, the Order of the Visitation.  From the friendship of Dorothy Day and Peter Maurin, we have the Catholic Worker Movement.  I'm sure each one of us here today can point to a moment when friendship sustained us at a difficult time or changed the course of our life in an unexpected way.  I was certainly sustained throughout graduate school by my closest friends.  And isn't there always someone who marks a critical moment in our vocation story?

We remember Mary Magdalene for her special friendship with Jesus, and for all that friendship brought her to do.  Perhaps we most see the tender power of their friendship when Mary finds the empty tomb.  In her weeping, she can't recognize Jesus right in front of her.  (Though, in her defense, I think he wanted to look like the gardener!)  And yet, the moment he says her name, she recognizes him and is comforted by his presence. The tenderness of the scene touches us in those places of sorrow and loss.  It reminds us of the times a good friend has helped draw us to see hope and a future amid the sorrow.

Yet, friendship is about more than comfort.  Mary is also Jesus’ disciple.  In fact, our tradition calls her the Apostola apostolorum--the apostle to the apostles.  In the garden scene just described, Jesus then directs her to tell the good news to his brothers, to the apostles gathered, frightened, trying to figure out what happens after their great leader is killed. And so she goes, and there we get this precious title for her preaching to the Apostles that Jesus Christ is risen from the dead--and that she has seen him.

When we turn to the tradition, we see that the name “apostle to the apostles” articulates one among many characteristics given Mary Magdalene.  She has been revered in the Christian tradition from the very beginning, and yet we have a rather fuzzy picture of her.  From the time of Gregory the Great in the sixth century, her story has been conflated with three of the other Marys from Scripture (and, by the way, there are five others in addition to the Mother of God!).  Mary Magdalene is revered as the penitent sinner, the one from whom Jesus expelled seven demons.  She was also considered the sister of Martha and Lazarus, which is part of the story of the relic here today.  In that context, Mary became the contemplative, the one who sat at the feet of Jesus in humble adoration while Martha bustled about and took care of the guest.  Regardless of the identification of this Mary, we have here a beautiful image of what it means to be a friend:  Mary shows us how to be present to another human being.  In that spirit of presence, Mary Magdalene later stands at the foot of the cross.

In studying history, we learn not only through what can be historically proven as true, but also through the stories told among faithful people throughout the ages.  So these conflated Mary stories continue to teach us about friendship and faithfulness.  The tradition shows us more than the contrast between Mary and Martha in that one scene from the Gospel of Luke.  We know that Mary Magdalene is the first to preach the resurrection to the Apostles.  Further tradition holds that it is Mary Magdalene's preaching that converts the pagans of southern France.  These stories, along with the legends of Lazarus and Martha, were transmitted for centuries, upholding Mary (and also Martha) as great preaching women in the church, women of power and influence in a world that badly needed to hear the Good News.

Here we have the story of women who carry on both the vita contemplativa and the vita activa.  It is not enough for Mary to know Jesus and share in a close friendship, but that friendship impels her out to preach what he preaches, to share what she knows about this Man-and-God with the world.  Not just because she wants to, but also because sharing that good news is what God has called her to do.
The calling Mary Magdalene receives, to be Jesus' friend, to be the preacher to the apostles, upholds her to do God's work.  Our reading from St. Paul shows us the power of friendship with Jesus.  In being called to that friendship, we are given purpose and direction, and we can trust that God will work in us for the good.  St. Paul even tells us that we are glorified in that call.  Like Mary’s experience of meeting the gardener Jesus at the empty tomb, we can be reassured that nothing, not even death, can separate us from the love of God.

Lucky for us, being a friend of Jesus does not mean that we have to be perfect.  Throughout the gospels we see the mistakes, missteps, and complete failures of Jesus friends, from Peter's many gaffes to the friends who fall asleep in the Garden of Gethsemane, right when Jesus most needs companionship.  Even Mary is known as a redeemed sinner, forgiven by Jesus and healed from her wounded heart.

In Mary we see a faithful friend, with Jesus to the very end, the very painful end of his life. (Because, of course, she did not know that he was God and would rise from the dead.  She only knew that crucifixion was the end until that morning in the garden.)  In Mary, we see the tenderness of friendship when all seems lost--she is weeping at the tomb, alone with her grief, stricken by the profound sense of loss.  In Mary we see a woman devoted to the cause of preaching the risen Christ to the apostles and to the world.  Her friendship with Jesus gives her the power to confess what she knows to be true and right, even when such confession can bring danger, banishment, and even death.

God calls each of us to carry on God's work in our world, and with each calling we are given what we need to accomplish that work, to carry on the mission, to preach the good news.  We are called both to a life of prayer and contemplation, and to a life of action, seeking to build the kingdom.  Like Mary, for us it is not enough to gaze in adoration.  We must then take the strength we receive from contemplation out into the world by our preaching and our actions.