January 07, 2019
Hello from Granada! I got here late last week, with a cold.. so I had a few quiet restful days, and just a couple of adventures. First up: the Alhambra!  My visit was scheduled for 4 pm, so I got to see the light changing as the sun went down (sundown was just after 6). This is a view from the Generalife, which is at the top part of the hill on which the Alhambra sits. You can see the Alhambra over below the sun, and part of Granada down below. The gardens surrounding the Generalife are gorgeous (even though it's winter). 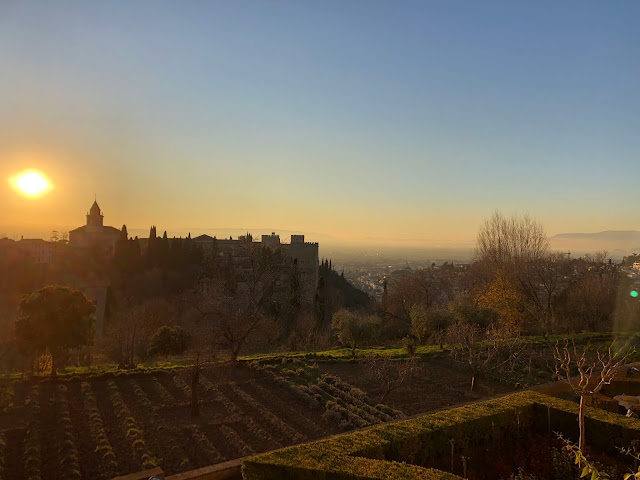 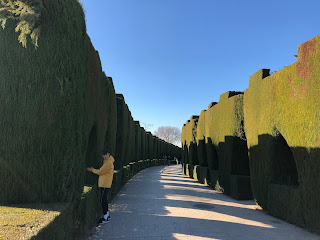 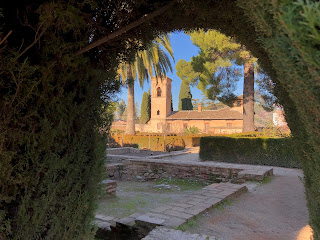 Many of the gardens were shaped in ways like this, and all of them had signs saying not to touch the plants. 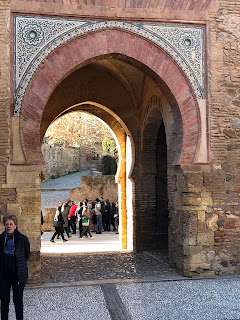 The arches of this style (I'm not sure what to call it--Mozarabic?) are all over Granada, and in some cases you can see them behind later modifications that were made when Christians returned to control. There is a great mix of architecture and art here in Granada, and not just at the Alhambra. 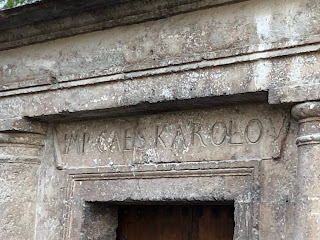 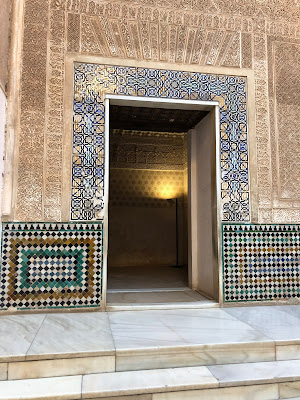 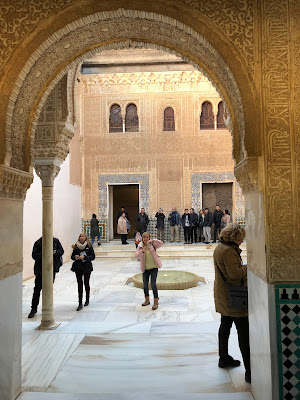 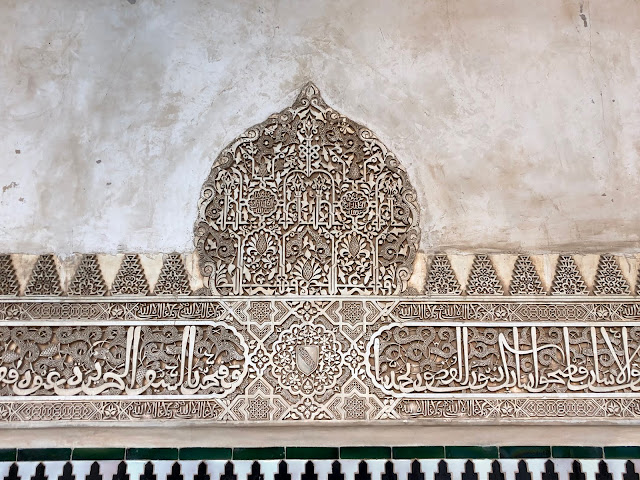 The image above is a wall decoration. It's so intricate and beautiful. The tiles below are about at my shoulder level, and so it's just above eye level to me. I guess that would make it above the heads of most of the people who lived here when this was new. 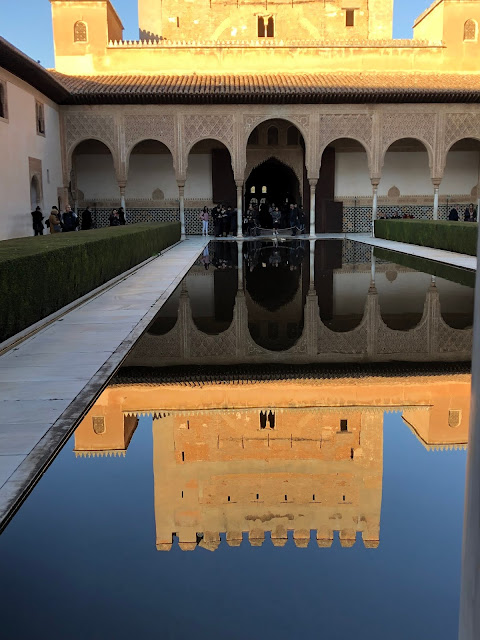 I was told by a sister here, and I also read in a guide book, that one of the charms of the Alhambra is the way water is used, the sounds that it makes throughout the area that were done deliberately to give a particular calming ambiance. It's true! There are lovely trickling and dripping sounds nearly everywhere. In addition you get lovely images like the one above in every courtyard. There is also a stairway with rivulets coursing down each side in what would otherwise be called a banister. And then water was also used to keep the rooms cooler in the summer, and to provide another layer of protection for the inhabitants, as the property was surrounded by a sort of moat. Really impressive. 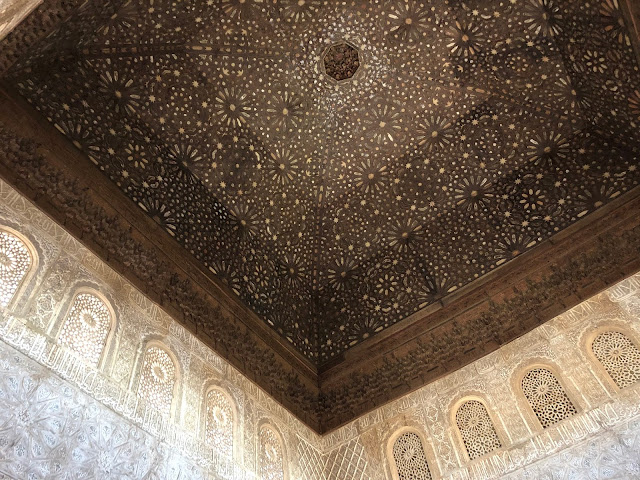 This room with the incredibly ornate ceiling is a perfect cube. It was where Ferdinand and Isabella heard the proposal of Christopher Columbus to find a way to get to the east by going west.  It's a beautiful room, with another incredibly intricate ceiling.

On a side note, my new favorite thing is asking Spaniards whether Columbus was Spanish, Italian, or Portuguese. No one knows, and yet everyone has an idea! 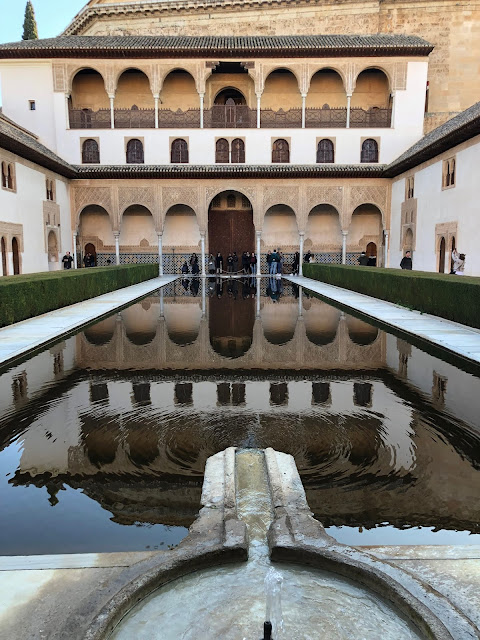 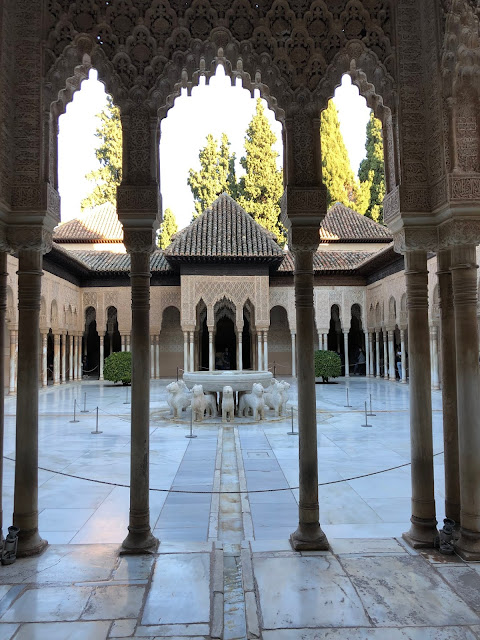 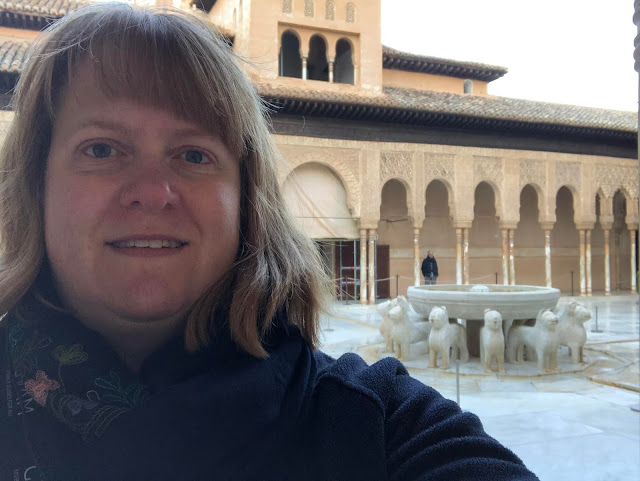 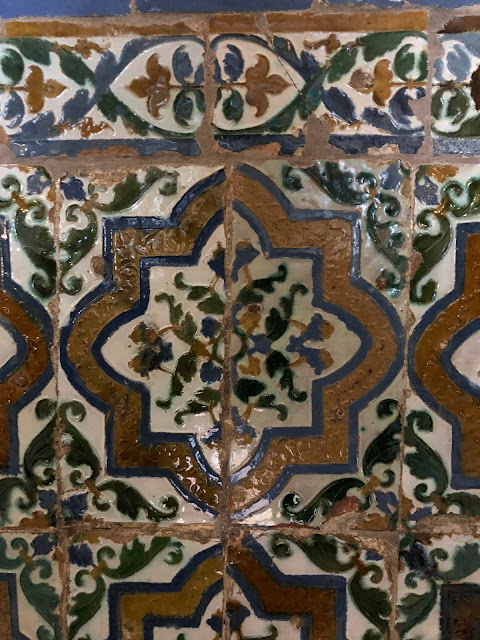 A little sample of the tile work. I was told later that much of the Alhambra shows little color because it was open to the sun and wind for centuries. In fact, it only became a national heritage site in the 1980s. Thus, there are other places in Granada that were more protected throughout the years and so show brighter colors. This one, however, is from the Alhambra. 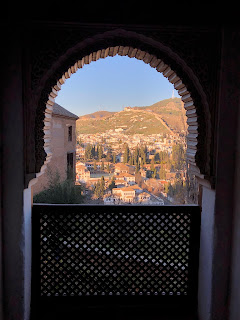 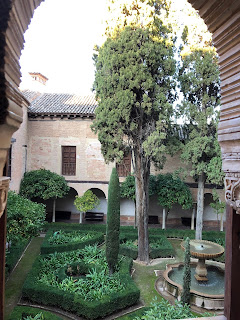 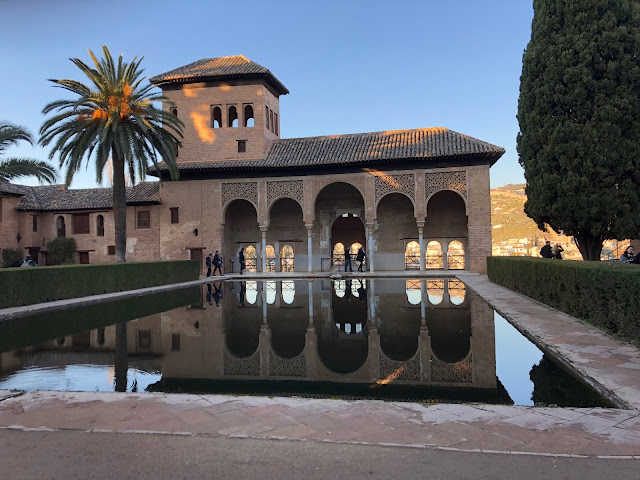 That's about it for the Alhambra. If you want to see more pictures, I think I have about 200 more! It was gorgeous, and the lighting only added to the beauty.

The next few days I'll stay in Granada, exploring the city. On Friday I will move on to my final stop--Almeria, where I will begin to work with the migrant project here in Spain. I mentioned before that there is an article about it in Spanish here.  If you would like my rough translation, please email me! (Since it's someone else's work, I don't want to publish it here.)

This is the Granada Gate, which you would have passed through as you left the city heading up the hill toward the Alhambra. 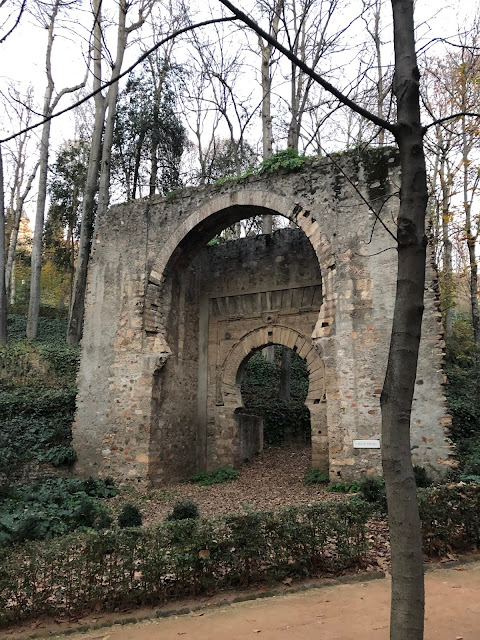 A few more things I've learned about Granada. The word itself, "granada," means "pomegranate." The pomegranate is a symbol of the city, and somewhere I heard that it was brought here by the Muslims when they arrived. Here are some pictures of the symbols use: 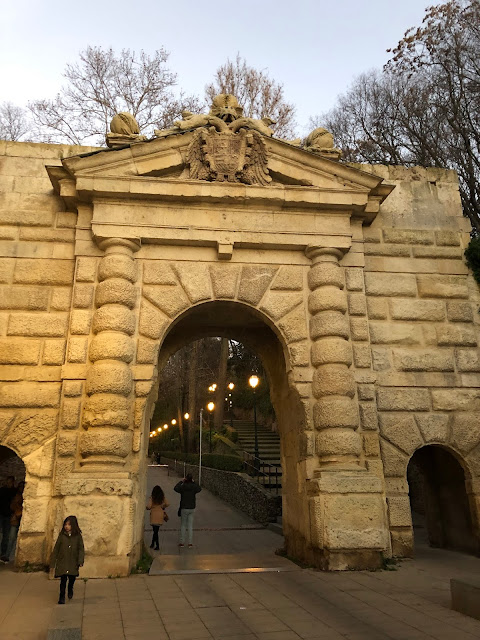 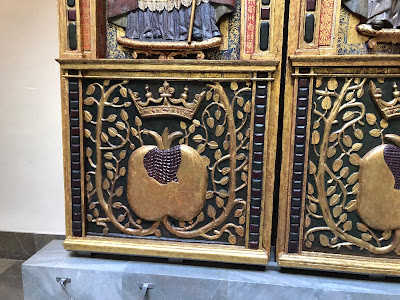 The above is the bottom of an old church door, no longer in use. Above the two crowned pomegranates are images of saintly bishops. 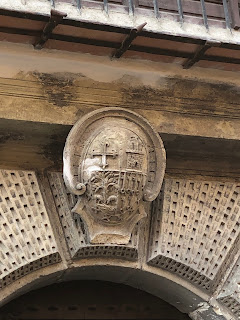 One of the earlier shields of the rulers here... That must be a Templar cross in the upper left, don't you think??? 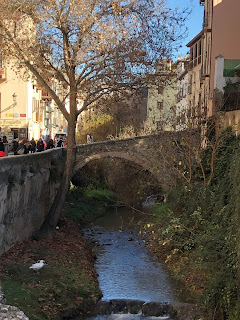 Finally, this is one of two rivers that meet in Granada. They are fed by the snow from the Sierra Nevadas, and so they are pretty low in the winter.

More later! Blessings to all!