Holy Week is upon us! Living in a Catholic country means that it is a holiday for us here, with no classes to teach or offices open. It also means a bunch of celebrations/events, many of which I'm told are unique to Andalucia.  There is a confradia here that has had its own triduum these past three days, culminating in a postres contest (desserts) and the giving of medals to new members, who are mostly very small children (even one baby). I know they have something to do with up-coming processions, but I still don't exactly understand what.

Today, Domingo de Ramos (which literally means Branches' Sunday, rather than Palm Sunday) included a lovely mass with many more people in attendance than usual... Here are some pics and a little video of the parish during the blessing of the branches before we entered the church. 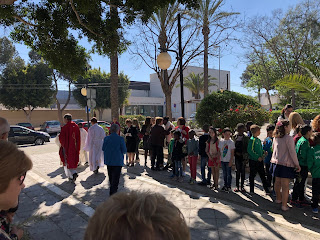 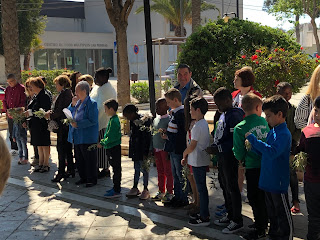 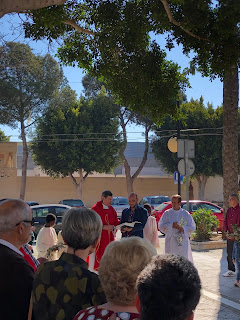 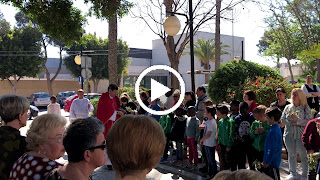 This evening there is what's called an "auto-sacramental," which I guess is how they translate "liturgical drama" here. They will enact the events of this week's liturgy. It sounds to me very medieval, but they've only been doing it in the parish for 23 years. When I first heard the name I mis-heard "auto-Sacramento" which sounded to me like it would be a Eucharist without a priest! Maybe like Thecla baptising herself after hearing Paul's preaching.... I was very wrong. It was explained to me as a catechetical device for those who can't read. Fair enough. (Also, the person directing it this year is named Jesus. They told me that Jesus would likely be late and so the performance would start late, and I burst out laughing, thinking they meant the other Jesus.)

One thing I've been pondering is the relationship between community life and mission. One of our chapter documents says that "community is for mission, and community is mission." I do believe "community is mission," and it is certainly fundamental to my understanding of religious life. (And I need to note here that "community" for me means living in the same house with other sisters.) But what does that really mean? I think we can sometimes get caught up on the other, placing community among ourselves as sisters beneath whatever ministry we are involved in, thinking that it is a more important "mission" than community life. Though my ministry may need more attention sometimes than my community, I don't believe community is less important than ministry, and so it must also be attended to. It is clear to me that what I think is not what everyone thinks!  I'd love to hear your thoughts, if you have any about this (probably better by email).