August 25, 2011
I finally saw the film Of Gods and Men this morning, and I think it will stick with me for a while.  If you haven't seen it, you should!  It is incredibly beautiful.  (And with that warning, I'm going to reveal a bit of the ending--though it's something I was glad I knew before I watched it.) 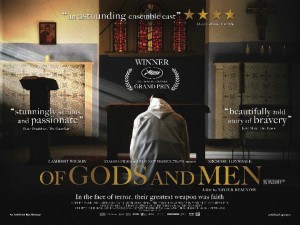 The film tells the true story of a Trappist monastery in the 1990s in Algeria.  The small group of French Trappists, who had been in this little village for over a century, was targeted by a group of terrorists during the civil war, and eventually killed.  The story is not about their death, but about their life with God, their love, and their commitment to each other and the surrounding community.
Several touching scenes show how the monks respect and care for each other, though I don't really want to give away too many details here for those who haven't seen it.  There is, however, a sense of the deep compassion they possess for one another, and the acknowledgement that each one's talents and needs, while different, are equally valued and respected.
Discernment in community becomes a central piece, as they decide whether to stay or flee the mounting violence.  Near the beginning, the prior makes the mistake of deciding for the group--there is beauty in his ability to humbly acknowledge his mistake and to allow the monks to discern together.  (Part of the Rule of Benedict asserts that the abbot is to bring serious matters to the whole community, weigh their advice, and then decide, for "the Lord often reveals to the younger what is best.")  Beautiful, too, is the transformation that occurs within each member of the community as they grapple with their fears and the life that lies before them.
I think the film presents a beautiful image of religious life at its best:  a community that cares deeply for one another, respects each individual's needs and gifts, prays together, and serves God's people with commitment and tender mercy.  And if I ever get to teach the Rule of Benedict again, I think I might have to use this film!
commitment community films God's love martyrdom

Anonymous said…
I'm glad you wrote about this. My community is planning on watching this together for our next faith sharing night!
August 28, 2011 at 7:34 AM

Sister Juliet, RSCJ said…
Hi! Thanks for visiting! It's a really beautiful film, though heart wrenching. My nuns have been telling me to see it since it came out last fall! It's a great and challenging illustration of what religious community is about. Enjoy.
August 28, 2011 at 8:21 AM