Going by the side roads

July 17, 2013
There is a great woman among our Sacred Heart sisters, who wrote of the side-roads and their spirituality (as opposed to the highways).  Janet Erskine Stuart, rscj, was the superior general of the order 1911-1914, and she wrote an essay called "Highways and By-ways."  "By-ways" is what we would call side-roads.
I'm on vacation at a house we have in the mountains in California, and I'm learning a little about the side-roads.  To get to this house, you have to go 5-10 miles in either direction on a winding road up and down mountains through the redwoods.  It's spectacular.  Of course, I can't actually take a picture of it (since I'm driving in it!!) but you can imagine the smell of the forest, and the sickeningly-windy roads going through it. (I do mean sickening.  I'm not sure I would want to be a passenger traversing these roads!)
These days have brought back to me the feel of growing up in Montana, and the vacations we took when I was a child to visit my extended family in Oregon.  The smell of the trees alone brings memories and happy feelings to my heart!  Ah!
A little snippet of Janet Stuart's essay on the highways and by-ways....  She contrasts the two ways, that by the highway, one is trying to "arrive" at the destination.  The journey is not about the journey at all, but about getting to a final location in a speedy fashion.  In contrast, the side-roads attract those who are on a journey, for whom the journey is more important than anything else.  She says of the side-roads:
“There pass the inspired people, the seers, poets in contemplation, shepherds and sons of the soil who hide behind irresponsive faces strange gleams of the unseen world, shadows of inarticulate fears, and hopes still more unutterable.  There pass village children gathering flowers, and gypsies in quest of forbidden things, and crazy, harmless wanderers perhaps wiser than the sane, and all the uncounted seekers after that which can never be known, and lovers of that which always lies beyond.  The people of the other world are attracted to the by-ways, where the mysteries call them onward, and the shy nightingales sing, and the stress of life is lifted off, and the ticking of time is still, where it is no longer the chronometer that divides the seconds, but the sun that rules the day, and the moon and stars that govern the night; where life seems larger because of silence and calm, where the soul may be invaded and taken captive unresisting by the power of the world to come, where the mind learns to rest in the Lord and wait patiently for the heart’s desire, where the conviction grows that at long last all things come home to their God, Ad Te omnis caro veniet!”
Her language is so lovely! And I pray that each of us find the path to a heart open to being "taken captive" by God, resting there in love. 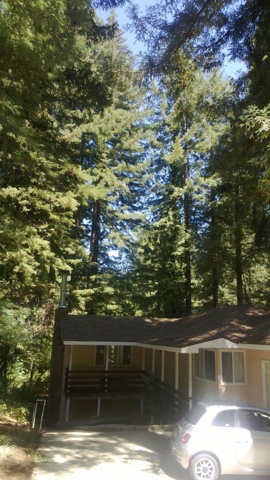