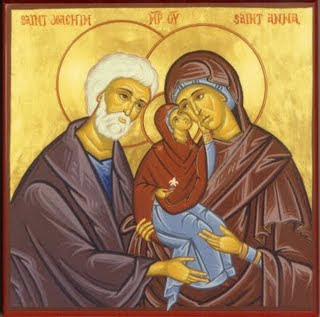 I grew up in a household that was not particularly devoted to Mary.  In fact, I don't remember ever saying the rosary, except one week at Catholic summer camp, and then I really learned how to say it in college.  It's still not a big part of my prayer life.

There are two lines from today's readings that stick with me:


"Nothing will be impossible for God."


"Behold, I am the handmaid of the Lord.
May it be done to me according to your word.”


I know, that second one is just not so favored lately.  But it speaks to me:  that I am striving to be attentive to the will of God, and that I hope to be pliable so that God's will might be done through me.  It seems this sort of phrase is sometimes used to justify that women should be submissive in general--but that's not what it says to me.  It says that I need to be obedient to God.  Sometimes that means obedience to other human beings, but sometimes it also means standing up to authority figures to defend the truth.

A book that helps me see the humanity of Mary in such a way that I relate to her better is Elizabeth Johnson's Truly Our Sister: A Theology of Mary in the Communion of Saints.  Johnson beautifully establishes Mary in her ancient Middle Eastern context.  I can see her as a little, strong, dark-skinned woman, one who works her fingers to the bone to take care of her family.  It helps to get away from the blond beauty who holds a book in Renaissance paintings.  Johnson speaks of the trials that her life probably entailed, being Jewish in the Roman Empire, living in a tiny town where all had to work together in order to survive.

It's helpful to me to recognize that the Mother of God faced the same struggles of everyday life that we all face, with only the exception of sin.  Being free of sin did not free her from worry, from hard work, from sorrow and loss, from sickness... Mary is truly our companion in that she can relate to our struggles.

And, don't forget, Nothing will be impossible for God.
Mary reflection scripture