November 01, 2012
At mass today, the homily was about Our Lady of the Angels, the cathedral in Los Angeles--and it reminded me that I have pictures from there!  If you don't know about the cathedral, it was only built 10 years ago, and it's a little different.  The architecture is unlike any cathedral you've seen before, and the majority of the artwork is found in tapestries. The tapestries line the walls, and in them are depicted saints in profile, looking toward the altar at the front. They are extraordinary, both in their size and in their detail.  The artist, John Nava, chose to use real people as models for the images, and so they are very life-like. 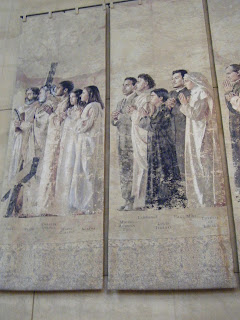 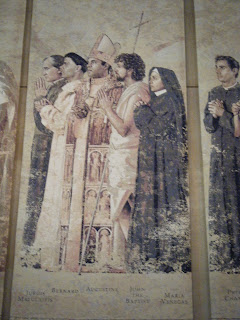 In some of these, I was just so delighted to see favorite saints depicted--such as Augustine above.  They are depicted so normally, with the skin tones they probably had (Augustine was African, after all), and in clothing appropriate to their time period and role (notice, for instance, John the Baptist's cloth).

So, today, let us pray with the saints, that God's kingdom may come.  Let us remember the beautiful, holy, and wholly ordinary people that make up the communion of saints--that great mystery in which we are united to one another across boundaries of time, space, and eternity.