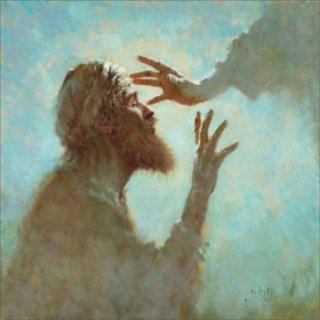 I preached today at mid-day prayer on the gospel passage Luke 17:11-19.


As Jesus continued his journey to Jerusalem,
he traveled through Samaria and Galilee.
As he was entering a village, ten lepers met him.
They stood at a distance from him and raised their voice, saying,
"Jesus, Master! Have pity on us!"
And when he saw them, he said,
"Go show yourselves to the priests."
As they were going they were cleansed.
And one of them, realizing he had been healed,
returned, glorifying God in a loud voice;
and he fell at the feet of Jesus and thanked him.
He was a Samaritan.
Jesus said in reply,
"Ten were cleansed, were they not?
Where are the other nine?
Has none but this foreigner returned to give thanks to God?"
Then he said to him, "Stand up and go;
your faith has saved you."

Today’s story hinges on the experience of a leper – his encounter with God, being healed, and returning to thank Jesus.
Scholars tell us that leprosy in the first century was not the leprosy we know today, Hansen’s Disease, but rather a skin ailment that resulted in discoloration.  In the first century, a leper was considered unclean and therefore was separated from society, isolated from friends and family until the time when he or she was healed and the leprosy removed.  Imagine, then, the effect of being healed from leprosy.  In this case, healing is a reconciliation, a reunification of the leper with the community and an end to the stigma and isolation.  The one healed leper who returns to thank Jesus must recognize the profound change that has overcome him, both physically and socially.  Once vulnerable, he is now returned to society a changed man.  He goes back to Jesus, praises God in a loud voice, and falls on the ground in adoration of the One who Heals.
Just as the leper met God in his vulnerability, so also that is where we find God.  No one here is a leper, but certainly all human life is marked by vulnerability.  Perhaps it comes from serious illness, or from worry over the illness of a loved one.  Or maybe we are vulnerable because of recent life changes – getting married or having a child, moving to a new city, or losing a job.  Maybe our vulnerability arises out of loss and mourning.  At this time of year, it could just be the ordinary anxiety of the end of the semester or of the coming holiday season.  Whatever the cause, vulnerability opens us profoundly to God’s healing transformative touch.
The theologian Sarah Coakley speaks of prayer itself as vulnerability—being open so that God can speak in us, and allowing God’s voice to transform us in unexpected ways.  She tells of how she was transformed as a theologian profoundly simply by silent prayer.  God found her in that silence, and her theological voice was changed. Each one of us here has at one time or another opened our hearts in silent vulnerability to God’s transforming call.  Some here have heard the call to religious life, or to be a parent, to teaching, preaching, or service.  Perhaps in our vulnerability we were touched by God – healed – so that we might heal others.
It seems like this is a bit about control.  Maybe we had already planned our life when God spoke in our silence.  When we are vulnerable, we are not in control of what happens to us.  The most vulnerable in our society, children, the elderly, the sick, must live without being in control of their circumstances or surroundings, and sometimes even of their own bodies.  We want to control God, too.  We want God to be there when we seek comfort, and to bless us when we do what we want God to call us to.  It doesn’t always work like that, though God certainly wants us to be our best unique selves and to be happy.  In our relationship with God, we are not in control, and we are least in control when we think we are most in control.
But, really, we do not control any of our relationships.  Each one of them must be a place of vulnerability, where we open ourselves to be known and changed by another person.  Anytime we love another person, any time we open ourselves to the love of another, we are letting go of our control, allowing another to shape and transform us in unexpected ways.
The leper returns to give glory to God loudly (as Luke says).  Jesus responds to the leper at his feet, saying, “Stand up and go; your faith has saved you.”  We hear him say this many times in the Gospels, to the flocks who come seeking healing.  Each one is healed by faith.
Allowing ourselves to be vulnerable requires faith in our loved ones and in our God, that they will allow us to be ourselves, that they will be vulnerable too, and that they will heal us rather than harm us.  Like the leper, we respond to God’s healing by giving thanks for all that we have received.  Next week, we celebrate Thanksgiving, and as we do every year, we remember the gifts we have been given – the food on our table, the love of our families, the companionship of our communities, our good health and healing.  These are our memories of God’s fidelity to us, a way for us to strengthen the faith it takes to become vulnerable again and again, to God and to the people we care about.  In thanksgiving, we may also remember the hardships, the times that bring what we have into sharp relief—the times of illness and suffering, of mourning and loss.  We remember that God comes to us in our times of trial, stands with us, and provides for our every need.
Jesus tells us, with the leper, to Stand Up and Go, saved by our faith, transformed by God’s grace, to glorify God in all that we do.

(Note:  the article I most recently read by Sarah Coakley, and which contains this theme of the vulnerability of prayer, is "Prayer as Crucible: How My Mind Has Changed," in Christian Century, March 22, 2011, pages 32-40.  I highly recommend it!)